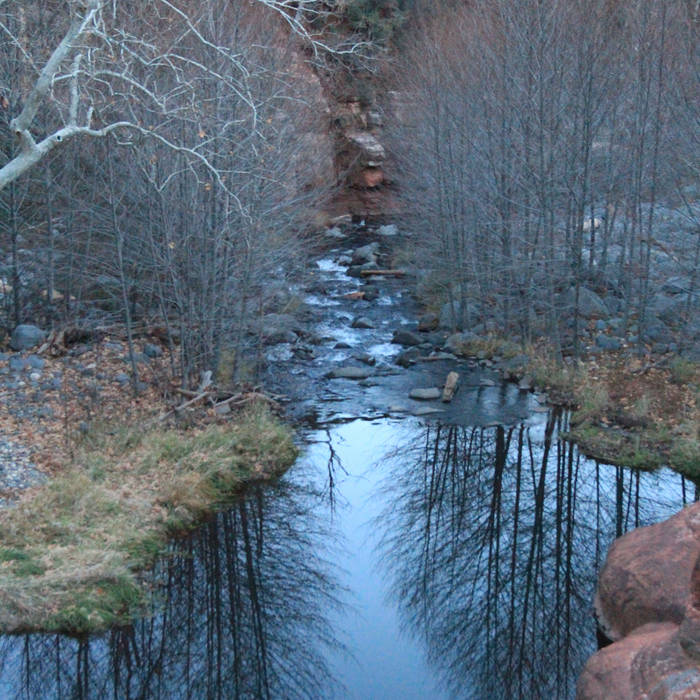 In 2005, Dave Hanagan asked me to make some music for his short Circadia Sees the Moon. In this beautiful little film, a young woman is kept from seeing the moon and, it seems, her adulthood. I tried to give childlike quality to the surface but rhythmic chaos underneath. I had just been seduced by the first three records by The Books, and had some of this in mind while building these sounds with Csound and my guitar. The Books taught me to trim the attack off of the note, which was extremely liberating. I began to find all these new ideas in sounds I already had. The film features a repeated shot of the moon, which I supported with this stretched high slide guitar sound you hear here, and later on this disc.

3. VCS3 Taste
Sometime in 2004 I wrote a program to impersonate the EMS VCS3, a synth I’d heard on lots of recordings, including Dark Side of the Moon. The sound was sweet and thick, like pork fat. I loved the sound and spent a week or so hacking this instrument together that would eventually be the backbone for my synth weirdness band Wizard Prison. This is the 1st improv I recorded with my new toy I made. The pulses transfixed us. At the end you hear what we in WP called the ‘Party’s Over’ sound, which Scott and I would use to signal it was ready to move on to the next idea.

I had heard Raymond Scott’s music in cartoons growing up, but hadn’t heard his groundbreaking electronic music work until the Manhattan Research Inc compilation Basta released in the early 2000s. Like some classic mad scientist, Scott built oscillators and mechanic sequencers from scratch, designing everything along the way.
I pictured RS’s circular sequencers rotating to create loops of sound and wrote these pieces, under the influence of Soothing Sounds for Baby and the occasional scotch. Most of these were created for my brother’s beautiful film Urban Scarecrow. The first three made it in (I think) but the final three I used for other things…

From The Emergency Pants Collection (2004)

Using the computer and my programming skills for so much music made part of me rebel and crave organics. I set a challenge for myself: create pieces solely with my 4 track, the crappiest guitar pedal I had, and my piano. Brandon Schaeffer liked them and used them in his impossible-to-find Emergency Pants collection of films – maybe he will let me post them on Vimeo? The ring modulator you hear on Broken Waltz is the only reason I keep that pedal around.

I am addicted to collecting sounds, and for long binges during the winter I will sit in our shed, long into the night, trawling the air for new sound on my shortwave set. I made this out of three recordings. First, the pulsing time signal you can pick up anywhere in the world on 5000Hz, 10000Hz, 15000Hz, you get the idea. Second, a brief digital signal coming from a buoy in our Puget Sound. Third, a distant voice speaking Arabic.

One of the first pieces of sound art I was actually proud of. I made this while in the composition program at the University of Washington, studying with Richard Karpen. My head was full, one part Squarepusher, one part Iannis Xenakis. I’m not sure this has much to do with either.
One loop is used throughout – you can hear it, unedited, in the first full bar of 4 in the piece. Xenakis created Concrete PH from a single recording of charcoal burning. With him in mind, I wanted to create as much as I could from this single loop. You’ll hear glitchy tweaker beats, a Nancarrow-style tempo canon, and Noh Theater-inspired spatial minimalism.

From Circadia, a reverse overture that crams all of the elements from the soundtrack into a final pulsing climax. The visuals involve crosscuts of a train crashing through a wall and the moon breaking through the clouds, which I try to reflect.