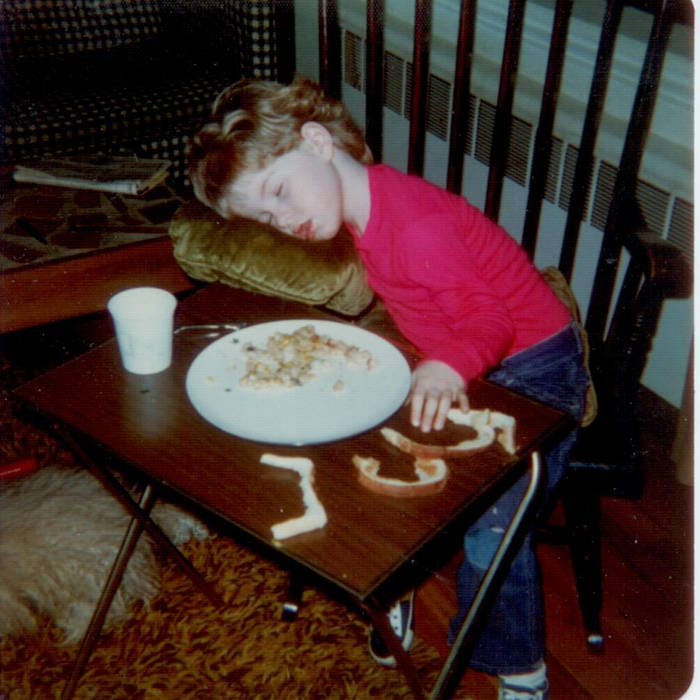 When I was little, my folks were cool enough to give me a record player and a bunch of random records. These would prove to be formative, just like everything else I heard - themes to tv shows, cartoon music, anything on the radio. I listened to everything with equal interest, but tried to manipulate the picture as soon as I found some way to interfere.

My folks had an 8-track player. I'd pull the cartridge in and out, trying to match the ‘weeerp’ you’d get when you plugged it back in with the beat on the record. I loved Blue Rondo ala Turk by Dave Brubeck, but liked it even better when I could spin the record backwards and control the speed with my fingers. As soon as I got ahold of 2 tape decks, I’d make my own jacked-up radio plays, interspersing wrong-speed variations on TV commercials I’d recorded with weird dialog my friends and I would make up. These recordings are sadly lost - sad for me, anyway.

I started making tape-pause collages back then too. Grab a blank tape, and record tiny bits and pieces of songs, editing the song(s) together on the fly. You have to remember what all you’ve recorded if you want any continuity, but that’s not always the case: sometimes it’s a game of exquisite corpse. I'd forgotten about this until the mid 90s, when the internet brought me John Oswald’s Mystery Tapes. I really dug these, and loved them for their composition-by-deletion economy which generated new sounds.

So this is a collection of pieces I constructed, rather than played, and might be the most out-there of these comps, so far. I don’t know - let me know. Here’s the rundown:

Soul Gold (2007)
Brother Reed O’Berne brought me a short film to score, a little piece my brother had shot (if I remember correctly). Timing the edits in the audio to those in the film yielded new rhythms and ideas.

Shimmer (1995)
The Yamaha MT-120 4-track dominated all of my time for a while, and I experimented like crazy. This is my attempt to distill what, at the time, were 2 of my favorite pieces of music: Pithoprakta and Metastasis by Xenakis. These textures would alternately alienate or envelope whoever I played them for. Here’s a condensed version of what I liked 20 years ago, coupled with my attempt to compliment said textures with my geeeetar.

You Need Something (2006)
Ryan Dignan and I were collaborating on sounds for Megan Griffith’s First Aid for Choking, this being one we recorded but did nothing with. The woman speaking through the shortwave is a nun recounting a particularly stressful trip to Miami, wherein the stewardess tries to calm her with alcohol. “You.. need… something…”. The percussion is an exercise Ryan created for his elementary school class using a tupperware cup or yogurt container…

Ambient for Piano (1999), Ambient for Viola and Guitar (2014)
I used to have this great schedule: “4 10s”: 4 ten hour days, with Fridays off. I’d sit in front of the piano 9-5, recording any keepers I stumbled into. The cover of the March edition was taken during this time.
This weird line, somewhat tied to serialism, was in an old notebook, one I found sometime in the “4-10s” period, and I made a little piano piece out of it. My friend Barret Anspach and I (we may get that trio going yet!) recorded a variant at our practice space, applying a few more rules to the composition, creating the phasing you hear here.

Blueberry (2006)
In this bit from William Weiss’ Emergency Pants collection, we hear the protagonist’s attention drift while he does the laundry, fantasizing he is winning a blueberry pie.

Shopping Thang
Tape pause on AM, in AZ. Listener’s guide: Ignore the clicks, listen to the bass, kick and snare in this one. This is what happens when I wait in the car while someone runs into the store ‘real quick’.

Travels of the Fetus (1996)
Matt and I make this collage of tape, Native American flute and gtr one night in Lake City. It reminds us of the womb so much, we name it this.

Double Yesterday
Tape Pause on FM. There’s something about FM radio transmitting 80s buttrock that just.. has it’s own flavor. Listener’s Guide: Follow the guitar, at least in the beginning.

Heaven
Tape pause on FM. Listener’s guide: I think the flutes work with the choral stuff..